Divorce can be one of the most emotionally charged and heated legal processes, and when children are involved, the situation gets even more complicated. Child custody is often one of the most important and difficult matters to resolve during a divorce proceeding. Despite everything, as a parent, you need to ensure that your children’s best interests and rights are protected.

In the wake of marriage dissolution, children are often the most affected parties. Not only are they left emotionally distressed, but they also have to adjust to a new living situation without the normal family they are used to. During a divorce, it can be difficult for the parents to make objective decisions in regards to who gets custody of the children after the marriage is dissolved.

Both parties may think that they know what’s right for the children and that they are most suited to have custody of the children which can lead to heated arguments. This is why most spouses going through a divorce choose to bring in the services of a Fayetteville child custody lawyer.

At Wade Law, our team of skilled child custody lawyers has vast experience dealing with even the most complex custody cases. We will help determine what’s in the best interest of the children while ensuring that your rights are protected. Our Georgia family law attorneys will help negotiate the most favorable child custody agreement and visitation schedule for all parties involved.

Are There Different Types of Child Custody in Georgia?

Under Georgia’s child custody laws, there are two types of child custody that should be settled in the event of a divorce: physical custody and legal custody.

Legal custody refers to the legal right of a parent to make major decisions on behalf of the child or children involved. When a parent is granted legal custody, they can make decisions in regards to the type of healthcare the child receives, where the child schools, and the general welfare of the child.

Physical custody addresses the child’s living arrangement as well as the parent’s visitation schedules. When a parent is granted sole physical custody they will spend the most time with the children, while the other parent is entitled to visiting the children based on a set schedule.

However, it is also important to note that even if the parents are granted joint custody, it doesn’t necessarily mean that the children will reside with each of them an equal amount of time with both parents. Depending on the children’s best interests, one parent may spend significantly more time with the children than the other.

Unless there is a record of domestic violence in the family, Georgia’s courts generally favor a joint custody outcome. In cases where the parents live far from one another or have a very contentious relationship, the judge may grant sole legal custody to one parent.

All in all, the judge will carefully evaluate the details of each individual child custody case and determine which type of custody is in the best interests of the child.

How Does the Georgia Family Court Determine Child Custody?

In most cases, the parents are allowed to decide on how to share parenting roles after which these custodial agreements are presented to a judge for approval. In cases where the parents can’t agree on custody, the judge will step and make a decision for them. While each parent will fight to get custody of the children in the belief that that is what is best for the children, there are many factors that the judge will take into account before making a verdict.

While any instance of domestic violence by either parent is seriously considered by the courts, it doesn’t outrightly disqualify the parent from getting custody of the child. However, it will make it much harder for the parent to be granted full custody in a Georgia family court. Such factors are investigated by child custody attorneys when building a case for their clients.

Can We Create a Child Custody Plan Without the Court’s Involvement in Georgia?

While the courts will eventually have to rule on the child custody arrangements, it is highly recommended that the parents come to an agreement on their own or through alternative dispute resolution strategies, for example through a mediator.

Here, the parents will decide on details such as where the child will reside, where the child will go to school, and how they will split the time spent with the children. Once this parenting agreement has been established it will be presented to a judge to be approved and filed by a clerk to become official. Both parties will be legally bound to the agreement and will be required to meet their obligations.

An experienced Fayetteville child custody lawyer will help to come up with a parenting agreement designed to ensure that your child’s best interests as well as your rights are protected. All our child custody attorneys at Wade Law are certified mediators and we are ready to help you reach an amicable agreement. We will take into account all the important details and circumstances surrounding your divorce case and ensure the best outcome for all parties involved. 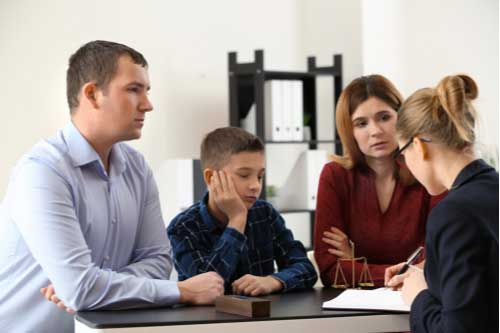 What if the Parents Cannot Agree on Any Aspect of Child Custody?

In some cases, especially in highly disputed divorce cases, the parents may fail to reach an agreement on the custody of their children. Understandably, emotions are at an all-time high, and when you combine this with resentments arising from previous arguments and high-conflict issues such as adultery, it becomes impossible for the parents to be objective.

They can’t put their children’s best interests first and come up with a comprehensive parenting plan together. In such cases, no one is willing to compromise and either side will be determined to win and get primary custody of the children.

If the parents can’t reach an agreement on their own and even after alternative dispute resolution strategies, the court will have to step in and create a custodial arrangement that works in the best interest of the child(ren) involved. However, this option is rarely ideal and should be considered as the last resort if the custody case is particularly contentious.

Not only is the court process lengthy and resource-draining, but it is bound to exacerbate the conflict making it unhealthy for all the parties involved.

Is Joint Custody the Most Common Arrangement?

Joint custody has become the most common custody order in Georgia family courts as spending as much time as possible with both parents is considered to be in the best interests of the children. But keep in mind, the judge’s decision is unpredictable and the outcome may go either way. The best and most effective solution is found when the parents work closely together to create a plan that works for everyone involved.

This not only helps to build a healthy co-parenting relationship, but it is vital in ensuring a smooth transition into the new living arrangement for the children. The point is to make the divorce as minimally damaging as possible for the children as they are often the innocent victims when a marriage dies.

Get in Touch With Our Skilled Fayetteville Child Custody Lawyers Today

If you are going through a divorce, you might be wondering what to expect in terms of the custody of your children. You definitely want what is best for your children, which may be keeping the children with you after the divorce. Our attorneys at Wade Law will help determine what is in the best interest of your children in your specific case and help negotiate the best custodial agreement for you and your children.

Contact Wade Law today at 770-282-1188 to schedule your free consultation with a Fayetteville child custody lawyer.

Are There Any Mistakes That Can Ruin My Georgia Auto Accident Claim?

Can You Receive Compensation for Anxiety After A Car Accident In Fayetteville, GA?